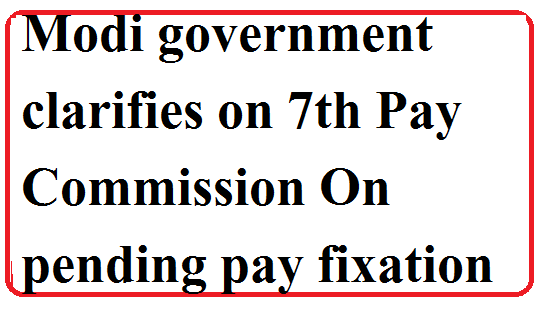 7th Pay Commission Latest News: Here’s the latest statement of the Union Government on the question of fixation of basic pay at Rs 18,460 of Central Government Employees who were promoted from Grade of Rs 4200 to Rs 4600 between 01-01-2006 to 29-08-2008 under the 6th Pay Commission. These employees were promoted as per the order of the Department of Expenditure (DoE) and a judgement of the Supreme Court in the Rajkumar Anand Case in March 2019.

Replying to a query seeking details on the above, the Union Minister of State for For Finance Anurag Thakur told the Rajya Sabha on Tuesday (March 23, 2021): “Hon’ble Supreme Court vide order-dated 14.03.2019 (in Civil Appeal No.3052/2019 Rajkumar Anand & Ors case) had directed to fix the pay of applicants as per Rule 11 of CCS(RP) 2008 and not at Rs 18460. This order had been implemented by GNCTD (Dte. of Education) in consultation with this Department. This Department has not issued any general orders in this regard.”

Thakur, however, said that the DoE had issued a clarification to DOPT, MEA, Railway Board and AFHQ regarding the manner of fixation of pay of officials promoted as Assistants /PAs between 01.01.2006 and 31.8.2008. It stipulated that their pay will be fixed as per the option exercised by them. In terms of CCS(RP) Rules 2008, these employees/officials have the option to:

(ii) from the date of promotion which took place after 01.01.2006; in such cases, their pay will be fixed with reference to the Fitment Table of the higher pay scale, however, they will not be entitled to arrears of pay from 01.01.2006 till the date of option.

On the questions of “the reasons for such long pendency in above cases of Central Government employees in contempt to orders of Hon’ble Supreme Court” and “by when basic pay of above officials would be fixed and pendency would be disposed off”, Thakur said that these do not arise in the light of the facts mentioned above.

The questions were asked by Member of Parliament Neeraj Shekhar.

As per the 7th Pay Commission recommendations, the minimum pay of a new government employee at an entry level is Rs 18,000 per month.