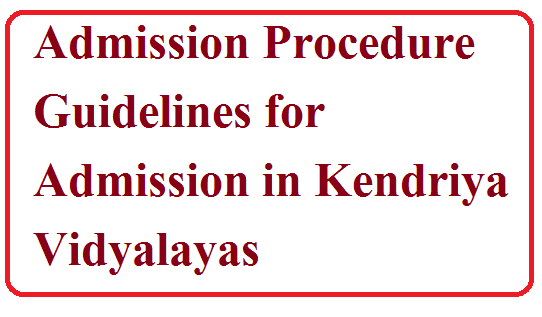 GUIDELINES FOR ADMISSION IN
KENDRIYA VIDYALAYAS

Unless the context suggests otherwise, the definition of the following terms used in these guidelines would be as below: –

(i). CENTRAL GOVERNMENT EMPLOYEES: An employee who is regular (i.e. an employee working on that post sanctioned by the Government in substantive capacity) and draws his emoluments from the Consolidated Fund of India.

(ii). TRANSFERABLE: An employee who has been transferred at least once in the preceding 7 years shall be deemed to be transferable.

(iv). AUTONOMOUS BODIES / PUBLIC SECTOR UNDERTAKINGS:
Organizations which are fully financed by the government or where the government share is more than 51 per cent would be deemed to be autonomous bodies/ public sector undertakings.

(v). SINGLE GIRL CHILD: Single Girl Child means the only child i.e. only girl child to the parents, with no other siblings.

The following priorities shall be followed in granting admissions: –

(A) KENDRIYA VIDYALAYAS UNDER CIVIL/DEFENCE SECTOR:

A Child must be 5 years old as on 31st March in the academic year in which admission is sought for Class I. (Child born on 1st April should also be considered.)

Note: The maximum age limit can be relaxed by two years in case of Differently abled children by the Principal.

The students of State Boards/ICSE/NIOS may be considered for admission in class XI if vacancies exist.

A KV Student, who went abroad with his parents on their deputation to a foreign country, will be admitted to corresponding class on their return to India by the Principal of Kendriya Vidyalaya, where admission is being sought (such admissions will be over and above the class strength)

In case seats remain vacant after 30th June as the case may be, in the year of admission, Deputy Commissioner of the Region is empowered to allow admissions up to the prescribed strength as per priorities in admission up to 31st July.

Note: In case of any issue related to the interpretation of Admission Guidelines, the decision of Commissioner KVS, will be final.

Automatic admission of children in the Kendriya Vidyalayas on the basis of transfer certificate issued by the CBSE affiliated schools run by Armed Forces (Army, Air Force, Navy) and Para Military Forces i.e. CRPF/BSF/ITBP/SSB (Sashastra Seema Bal)/CISF/NSG and Assam Rifles will be entertained only if the parent has been transferred to that place or has desired to settle at the place after his retirement, or transferred to some non-family station or posted in Naxal affected areas and choose to keep the family elsewhere.

It is clarified that above provisions are only for the wards of Defence personnel /Para Military Forces i.e. CRPF/BSF/ITBP/SSB (Sashastra Seema Bal)/CISF/NSG and Assam Rifles viz. sons & daughters only. This will not include the grand children of Defence personnel. Provisions of KVS admission guidelines including the eligibility criteria for age and marks/Grades will be followed in letter and spirit. Also, the fee including VVN is to be paid from the month of admission of the child in the Kendriya Vidyalaya regardless of the fact that the fee for succeeding months have already been paid in the school from which TC has been issued for admission to KV. TCs issued by the CBSE affiliated schools of Defence Ministry/Deptts/Authority will be endorsed by the concerned Deputy Commissioner of the region where admission is sought.

3. CHILDREN WHO WERE EARLIER STUDYING IN KENDRIYA VIDYALAYA:

An advertisement for online registration to Class-I shall be issued by the Regional Office in the local newspapers as per admission schedule and inviting Parents to register their wards for admission in Kendriya Vidyalayas. This advertisement should specifically indicate that admissions in Kendriya Vidyalayas are not restricted to Central Govt. employees and are open to all, only certain priorities have been laid down for different categories to regulate the admissions. The reservations for SC, ST, OBC-NCL and Differently Able under RTE Act 2009 should also be indicated.

4. METHOD OF ADMISSION IN CLASS- I

The shortfall in the number of candidates on seats reserved for SC, ST and OBC- NCL will be worked out after considering the number of SC/ST/OBC-NCL children admitted under RTE quota and Priority Cat-1 and Cat-2.

(3% seats for the differently-abled applicant would be reserved horizontally)
After closing of process of registration, the sequence of conduct of lottery by each Kendriya Vidyalaya will be as under:

The following sequence is to be adopted for the fresh admissions to Class-I in Kendriya Vidyalayas from the academic session 2020-21 and onwards.

Since Kendriya Vidyalayas are located at places with varied density of population, they have been categorized as follows for determining the limits of neighborhood:
1. Major cities and Urban area (All District Hqrs. & Metros) 5 kms. Radius
2. Places and areas other than included in 1 above. 8 kms Radius

Note:-2
1. Proof of residence shall have to be produced by all applicants.
2. A self-declaration in writing from the parent about distance may also be accepted to this effect, subject to verification.

5. Admissions for class I are being done through online mode & for other classes it is offline.

Composition of Committee for Offline Draw of lots: Every Kendriya Vidyalaya will constitute a committee for the purpose of monitoring a system of Draw of Lots to be held in Class I or in any other class (for offline mode only) wherever such stage is reached when all candidates of a particular category or having same number of transfers cannot be accommodated against available number of seats.

The committee will comprise the following five (05) members: –

6. FEE AND OTHER CONCESSIONS:

7. METHOD OF ADMISSION IN CLASS II TO VIII

Admission test shall not be conducted for admission to Class II to VIII and the admission may be granted based on Priority Category system (1 to 5 or 6 as the case may be). If applications are more than the number of seats, lottery system will be followed in each category including single girl child quota (Class VI Onwards).

8. METHOD OF ADMISSION IN CLASS IX

For admission to Class IX, an admission test shall be conducted and a merit list will be prepared for each category of priority separately. Admission shall be granted in the sequence of priority categories, in the order of merit.

9. METHOD OF ADMISSIONS IN CLASS XI

Admission in different streams viz Science, Commerce, Humanities of Class XI in KVs for KV students will be based on aggregate marks scored in class X exams as under:

Note: If seats remain vacant in class XI even after admitting the children of KV/ neighboring KVs then the admissions to non – KV children may be granted on the same criteria, in the sequence of categories of priority.

However, there could be instances of lower enrolment in Class XI in some KVs, especially those located in hard stations and remote areas after applying the above criteria for admission. In such an eventuality, Principal of the KV concerned should send the proposal of lowering the eligibility criteria for various streams along with the details of registration, No. of eligible students, etc. to the Deputy Commissioner of the region. The Deputy Commissioner may use her/his discretion in lowering the eligibility criteria to the extent as indicated below:

KV Students:
Admission in different streams viz Science, Commerce, Humanities of Class XI in KVs for KV students will be based on Marks scored in class X exams as under:

Note:- If seats remain vacant in class XI even after admitting the children of KV/ neighboring KVs then the admissions to non – KV children may be granted on the same criteria, in the sequence of categories of priority.

Concessions wherever applicable shall be incorporated while preparing the Merit List.

THE FOLLOWING CONCESSIONS WILL BE ALLOWED FOR ADMISSION FOR CLASS XI.

(A) The following concession will be granted to students for admission who participated in Games & Sports meet/Scouting & Guiding/NCC/Adventure activities at various levels. The certificate needed for this purpose can be of any of the preceding years.

(B) Students belonging to SC/ST/OBC/ Divyang (PH) would be given up-gradation in aggregate by 4% Marks for the purpose of admission to class XI.

Note: Maximum concession under Sports/Games/NCC/Scout/Guide/Adventure will not exceed 6% Marks in aggregate. In case of eligibility for more than one concession under different categories as mentioned at (A) and (B) above, only one concession having maximum advantage to the candidate will be allowed. (The same benefit may be extended to non-KV Students for fresh admission in KVs.)